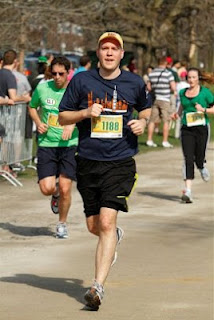 As a writer for NewCity magazine, I'm excited to be running the Bank of America Shamrock Shuffle 8K this Sunday, but I'm really excited to be running as a member of the press, which means that I'll be part of a very cool new feature of the race this year: the "Media Challenge." As part of this challenge, all the media participants (~33 of us) have been divided into three teams who will compete on race day for the fastest team time (the times of all team members will be added together and the lowest time wins).
Here's a description from the site of what the winning team gets:

"The Bank of America Shamrock Shuffle 8K, Chicago’s traditional kick-off to the spring running season, will donate $5,000 to the Chicago Park District on behalf of the winning media team. Nike, an Official Level Sponsor of the Bank of America Shamrock Shuffle 8K, will award a matching donation of $5,000, providing a total of $10,000 in support of local youth running programs organized by the Chicago Park District."
Pretty sweet.

So yesterday we had an old-school draft over the phone and the teams were picked. I'll leave it to members of the other teams to share their team roster, but here is mine (the winning team, right?):

Right now I don't know any of these people, but I'm looking forward to meeting (and high-fiving) them on race day, or possibly at the expo tomorrow when we get a chance to meet (and run with) this guy.

Look for more Media Challenge updates here over the next few days!