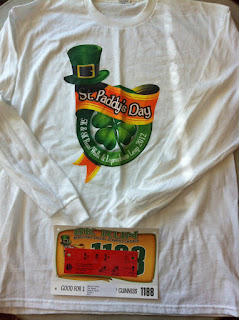 I'm a little buzzed as I take the train to Sports Authority to pick up my packet for the St. Paddy's Day 8K on Sunday, which gets me thinking about the weekend (and the race) ahead...

First I need to interject and point out that the full title of the race as listed on the site (and on the rather bland shirt to the left) calls it the St. Paddy's Day 5k & 8K Run/Walk & Leprechaun Leap 2012, which is an incredibly detailed and punctuation-filled title for a race, and makes me wonder why they didn't just tack on "Day After" to the start of the title since they're already going into so much detail anyway.

...I had intended to take a short run over lunch to pick up the packet, but got a small insight into how indulgence can spoil running plans when a coworker brought in champagne and a German chocolate cake for my birthday. Now I'm on the train in my work clothes instead of on the street in my running gear. Which is making me wonder how much I can drink tomorrow and still feel motivated enough to wake up on Sunday and run 5 miles (okay, okay, 8 kilometers if we're being specific).

I'm thinking that's why this race starts at 10 am, though - to give those of us planning to take advantage of the perfect weather and fully immerse in the crazy Chicago celebrations of the patron saint of Ireland by watching dye be poured into the river and then drinking all day (apparently both things Patrick totally loved) a chance to let some of the previous day's shenanigans wear off before we hit the starting line.