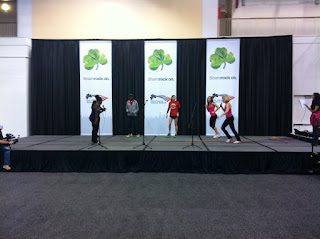 I got off work early to head to the media event at the expo for the Bank of America Shamrock Shuffle. The plan was that we would get to hang out with and run a two mile "Fun Run" with Olympic runners Abdi Abdirahman and Tera Moody. Trying to decide whether to take a bus or a cab to Navy Pier I realized that I was clearly discounting a third, more appropriate, method: running.

So I put my iPhone in a super high tech protective case (aka a ziploc bag) and headed out the door. Surprisingly, the light rain actually made it a nicer run - I find that pedestrians and cars alike are a lot more accommodating of runners in the rain than they are to us in sunny weather... it could just be that they figure if we're dumb enough to run in the rain they should probably steer clear because we might just run into them at any second.

After covering the mile and a half to the expo (and getting only mildly soaked) I collected my race bib (number 469! Definitely the lowest number I've had for a race anywhere near this 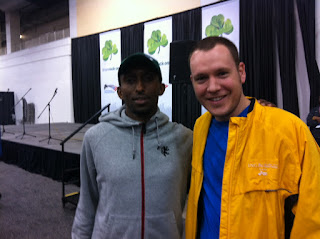 big) and packet (VIP wristband!), checked out all the free stuff (Clif bars, 24-hour Energy, FRS Energy, Gatorade, QDoba, etc.) and then headed over to the main stage to watch Andrea Metcalfe lead the two Olympians in some "warm up" exercises and briefly interview them.

Here's a recap for you: Abdi is planning to run 5-6 miles BEFORE the race as a warm-up and then four miles AFTER the race as a cool down. So his 8K is more like 15 miles. Just keep that in mind when you're feeling really tired on Sunday (plus he's aiming for 4:30 miles). Craziness.

As we were getting ready for the short run, it was decided that it was too rainy outside for us to do a full two miles, which was a bit of a disappointment, but they still filmed us running in a tight media/Olympic pack for about 100 meters or so. Hopefully we looked like we were in the middle of a really long, hard run. In the rain, no less. Fake hardcore is as good as real hardcore if it's on film right? Some part of the run should show up on ABC7 tonight. Probably as background for the interviews with Abdi and Tera. 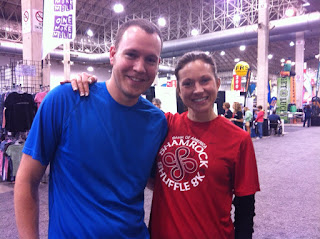 But the best part of the event for me was that I got to talk to Tera quite a bit before and after the run about Chicago, Colorado, journalism and theatre. She's super-friendly and even introduced herself to me.

Anyway, to recap: a nice run in the rain, a sweet expo (it was definitely nice to be there before everyone else gets off work and it gets crowded), and a conversation with a hot Olympian. I was pretty happy with my Friday afternoon.