I just ran the Fastest Mile EVER (for real) 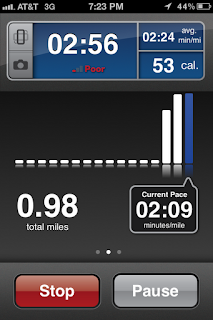 ...but it does get a really bad GPS signal around my apartment... so the distance might be just a little bit off. (I mean, to be totally honest, I was probably just doing a 3:30 mile).

If you're curious, here's what my superhuman route looked like at the end: 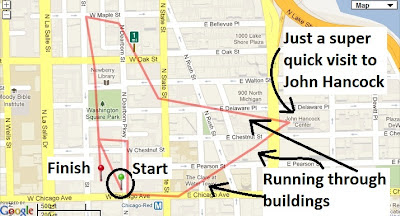 As you can see, sometimes I get a little erratic when I'm trying to set a world record so I just start totally ignoring streets and running right through buildings (hardcore I know, but you have to be if you want to be a champion right?). Also, I'm a little OCD so I always have to tag the John Hancock Center at some point during a run.
Regardless of the app's accuracy, someone needs to contact Hicham El Guerrouj and let him know that I'm no longer that impressed with his 3:43 mile on a flat, marked course - I mean I was doing this with stoplights and building security guards and everything.

Anyway... on the boring serious side of this, I've had the RunKeeper app for almost a year and with each new release I expect at least a little bit of an improvement in the GPS tracking in my area and it never comes. I'm really not trashing them, though; there are a lot of tall buildings around me and it's very reliable in more open areas like the lakefront and Lincoln Park, plus it was only $10 to download. Like most people in the 21st century though, I'm just impatient with my technology when it's not PERFECT. (Translation: Don't worry RunKeeper, I still love you.)

Does anyone else use RunKeeper to track their running? If so, I could totally use some Street Teammates up on that mofo.