July 10, 2012
Tonight I ran the first of two evening races this week (which also kicked off my first official day of marathon training). Luckily my first day of training is supposed to be 3 miles, so this race worked out well. It was the Les Turner Strike Out ALS 5K and although the map on their site has it listed as a 3.3 mile course, I'm pretty sure it was a straight 5K.

My review is up at newcity.com

It started outside U.S. Cellular Field and KayLynn Van Driest spoke beforehand which was really motivational: 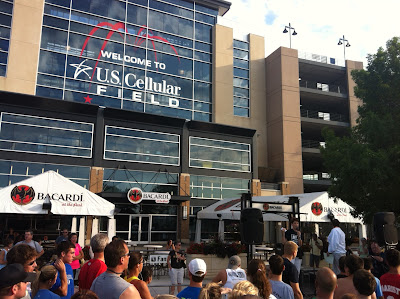 ...and as you can see from the map above the course went all over the place - but I kind of liked that. It was definitely better than an out and back course.


I tried to get some pictures during the run but I was also trying to finally hit my long-time goal* of running a 21 minute 5K so I stopped doing that pretty quickly. Right at the start, though there was a Metra train going by as we ran into a parking lot and I almost got a picture of it (you can see the end of it) here: 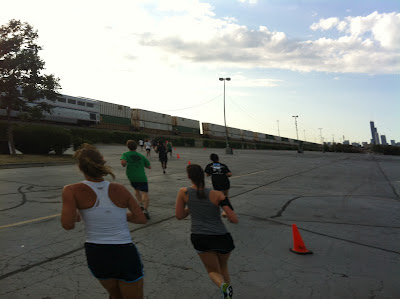 The last (forever) of the race is through the bottom floor of the stadium which was really cool. It did start to feel like you were never going to get out of the long, slightly curved hallway you were running through, but I liked it. Especially afterwards when I realized that we had actually ran around the entire field (for some reason I didn't realize that beforehand). The finish (probably the last 2/10ths of a mile) were around the warning track inside the field: 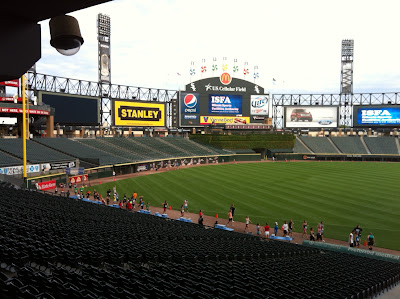 If you don't know what a "warning track" is, don't worry. I didn't either until I ran this. It's apparently  a section of dirty around the actual field... not sure how I never noticed that but I never claimed to be a big baseball fan.

After the race, they played the All-Star Game (which happened tonight - who knew?) on the Jumbotron which was pretty sweet. Just last week we went to a game at U.S. Cellular Field with some friends from Texas to watch The White Sox destroy the Texas Rangers 19-2... it was kind of depressing. Not because I was rooting for either team but because that's just an absurd score.

We were sitting somewhere in right field up on the second level. But tonight the stadium was pretty much empty. 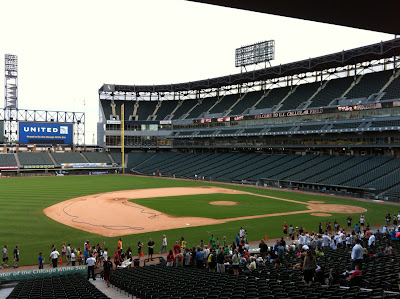 Overall, great race. I found out that last year they had runners going up and down the ramps, which sounds pretty sweet to me, but I guess I'm glad that they took that out of the race... *even though I didn't end up making my goal. (21:35)

21 minutes - me and you will meet some day, but that day wasn't today.