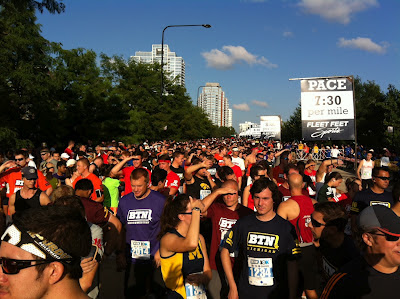 Even though I'm a Longhorn and not really a sports fan (college or otherwise) I was pretty excited about the BTN Big 10K. Since I'm running the Miles for Melanoma 5K tomorrow, I was planning to take it a little easy on this one. But once the race started, with all the energy that comes with any race, I was running a little faster than I planned to. I was planning for 8 minute miles, but I felt good after the first mile so I figured I might as well just keep going. I did steadily lose speed at each mile throughout the race and definitely wish I would have eaten something for breakfast to at least give me a little bit of energy to burn so I could pick up the pace, but it was still a good race.

Here's a sweet high-tech html table breakdown of my splits:

Clearly I started out a lot faster than I should have and could not maintain that pace at all, but the good news is that I've gotten a lot faster since the first 10K I did this year. So, Michael Winchester, watch out.

I was wearing a Northwestern shirt to represent for Dina, but I kept forgetting that and getting confused when people would yell "Go Cats!" and other Northwestern-y cheers. All the costumes and cheering for various schools throughout the race really made me want to do a Big 12 race like this so I could be wearing my real colors and know who all my rivals were on the course... being totally ignorant of the Big 10 (although now I know it has 12 schools in it. WTF?) I'm not sure who I was supposed to be "against" out there.

But it was a really well-run race and the weather was almost perfect. The inflatable slip n slide at the halfway point (which looks exactly like the one on the left, which was near the finish area) was an awesome idea and I was pretty annoyed with myself for carrying my phone in my pocket since that kept me from being able to jump on the slip n slide. I only saw a few people doing it so there was no line, which meant you could jump into it at a full sprint. Very sweet.

Anyway, my full review is at Newcity.com.

Standing in the line for the port-a-potties before the race, a sudden commotion broke out a few lines over from me. A woman was having a seizure and had fallen on the ground and hit her head. A lot of people started yelling for a medic but a few people started trying to help her, setting a bag under her head and clearing the people away from around her.

To wrap things up here are some pictures of the post-race party (or tailgate party, as they called it on the site), starting with the hot dog counter, where the volunteers were yelling "Give me your ticket, get a dog!" I think that's a pretty sweet thing to yell at people, especially if you're wearing a chef's hat. And here's a bunch of people in Big 10 getup standing around and post-race partying: 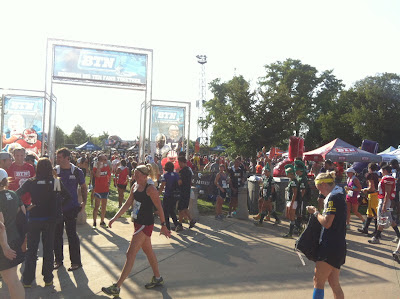 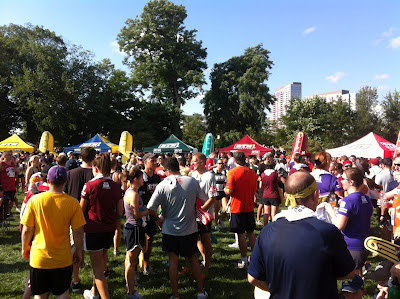 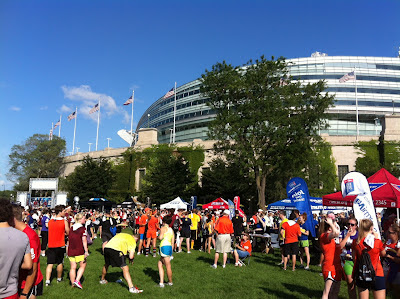 Both the 5K and the 10K sold out this year and I have a feeling they'll increase the amount of runners they allow for next year but it will probably sell out again. And I definitely won't be carrying my phone in my pocket. That picture I got in the starting chute was definitely not worth missing out on a slip n slide in the middle of the race course.