July 29, 2012
This morning when I finished the Teb's Troops Miles for Melanoma 5K I finished the 30th race I've run this year. I don't think I've run even half that many races in any other year, and it's been pretty exciting being part of all these races this year. But aside from that, I also finally managed to reach my goal of breaking 21 minutes in a 5K, even if it was just barely (20:48). I honestly don't think I ever ran that fast even when I was running cross-country in high school. (How did I stay on the team with results like that you ask? 1. I went to a very small school in East Texas, 2. I was the slowest person on the team).

So here are my splits from this morning. Again with the super high-tech html table showing that I have no steady pacing ability:

What was more exciting than hitting my ever-elusive goal was that because this was a pretty small race (and since Chicago Runner Girl wasn't there), my time put me into 4th place overall and 3rd overall male (well, I still would have gotten 3rd overall male at least). So I got to get up on the stage and pretend like I was at the Olympics. USA! USA!


The third place prize was a single airbrush tan from The Sinless Tan. I don't know how they knew that third place would be a pathetically pale specimen of a human, but they were right. Not sure if I'm going to use this or not, though. People are going to be suspicious if I show up at work with a tan all the sudden...

At the start of the race I was talking to Chris Fusco from the Sun-Times (who landed in second overall male) and he was shooting for 21 minutes as well (which he crushed with a 20:15) so I was trying to at least keep him in my sights throughout the race, but he escaped me by the end. Well done, sir. He was heading out to run 11 more after that as part of triathalon training... I was heading out to drink enough to make up for not drinking last night. Obviously one of us is more of a real athlete than the other...

Anyway, there was a pretty impressive media team turnout for this race and quite a few of us got medals, so we got a big medal-wearing picture. Dina took the picture, but I'd like to note that she also medalled in her age group (which she didn't find out until after the picture) so she should be in the picture herself. To my right and left are Kate from fit-ink and John from Running News Guy:

So it was a really fun race with a small-town feel (even though it took place at Montrose Harbor). I'd definitely recommend checking this one out if you want an open field to shoot for a PR (and possibly a medal).

My full review is up at Newcity.com 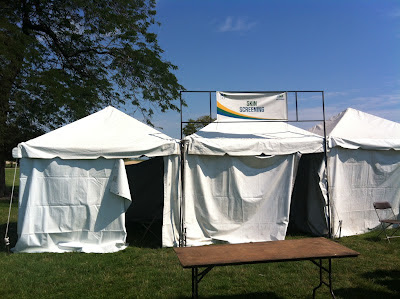 Aside from the race itself, there were a few other sweet aspects to this thing. First off, the dermatologists giving free skin screenings were great. I stopped in for one of these and the doctor looked me over for a few minutes and then told me I should be seeing a dermatologist regularly (I have a ton of moles). He gave me some info and told me to call to set up an appointment as soon as possible. So, the race is definitely serving its mission of raising awareness about melanoma, which is a great thing for any charity race. So don't worry Mr. Dermatologist, I'll go get everything checked out.

Also, to wrap things up, this race had a crazy goodie bag. Seriously, it had the most "goodies" that I've ever seen in a goodie bag. Check it: 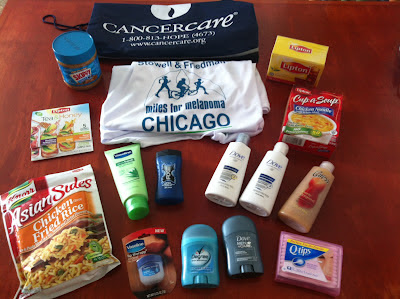 This is another race that I can't recommend enough, especially since it only cost $30. But you're only allowed to run it next year if you're slower than me.