July 03, 2012
As I mentioned a few weeks ago, I ran the inaugural Lifetime Torchlight Chicago 5K Run. Yesterday they sent out an email to everyone that ran it this year with a code for 50% off next year's race (June 20, 2013). I'm not planning that far ahead, but I thought I'd pass it on in case anyone else is, because it's a pretty good deal, considering they gave out two free beers per registrant (I realize I keep going back to that, but that's just such a great selling point for me).

Basically just go to the registration page and then enter the code 2012TORCHRUN. The code is good for the first 500 people to register or until July 15th (whichever comes first). 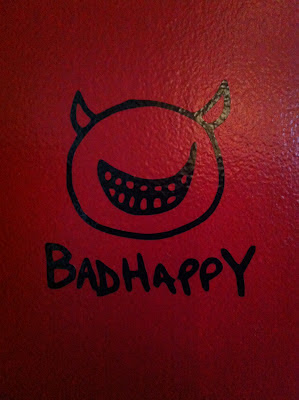 On a totally unrelated note, after running Sunday morning (luckily, before the unexpectedly crazy storm blew through for 5 minutes) we went to a little place in River North called BadHappy Poutine Shop. It was a happy coincidence that we showed up on Sunday because in case you didn't know, Sunday was Canada Day. That might sound irrelevant, but poutine is a Canadian dish (wikipedia can tell you more about it) and it was a Canadian party in there. But, if you have never tried poutine (which we hadn't), the reason I'm mentioning it in a running blog is that it is the ideal food to reward yourself with after running: as you can probably tell from the wikipedia description, it's in no way good for you.

In fact, I heard someone ask the chef why the place is called BadHappy and he said something to the effect of "Because you feel so bad after you eat it but you're so happy because it tastes so good." He is not making either of those things up. Their various poutines are totally amazing AND they're not just BYOB, they're BYOV (bring your own vodka) on Sunday with bottomless mixers for $5.

Anyway, check out the menu and then run there after finishing an especially intense run that you think has earned you the right to an unlimited quantity of delicious calories. (They also have awesome shakes).

When we were getting ready to leave, the kitchen launched an eating contest, which Brynn entered me into while I wasn't paying attention... I pretty much got last place. I blame the fact that I had just finished an entire T-Rex poutine (a poutine covered with pretty much every type of meat) about 15 minutes before the contest.  But we're definitely going back. 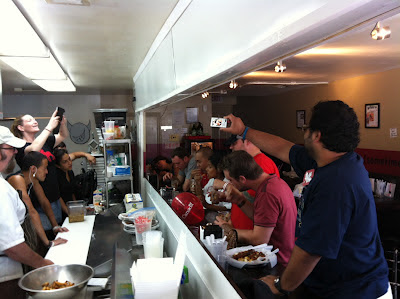