July 27, 2012
So last night Brynn and I ran the Undie Dash, an evening 5K on the lakefront where you're supposed to strip down and run in your underwear. Since we're too lame and un-body-confident (I just coined this word), we didn't quite do that, but we also didn't want to look weird in normal running clothes. So Brynn went to Marshall's before the race and bought some weird clearance underwear for each of us - she wore hers over her running shorts and I wore mine over running short tights. We probably had on the most clothes of anyone there. Lame of us, I know. 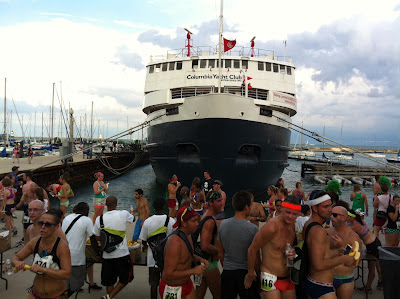 Even though this was only the second annual Undie Dash run it seemed like people get the concept and really get into it, so we definitely have way better costume plans for next year (and at least we have to be in our underwear - and we have a year to get into better shape for that). There were some great costumes last night so we have to try to compete with them next year.

My review of the race is up at Newcity.com

Anyway, here's a breakdown of the costumes I remember from last night. No pictures, sorry - I didn't want to walk around snapping pictures of everyone like a creep. There was a guy with a professional looking camera taking a ton of pictures so I'm sure they'll have pictures up on the site at some point. And keep in mind, all these costumes aren't just costumes, they're underwear costumes, if that helps give you better mental images: 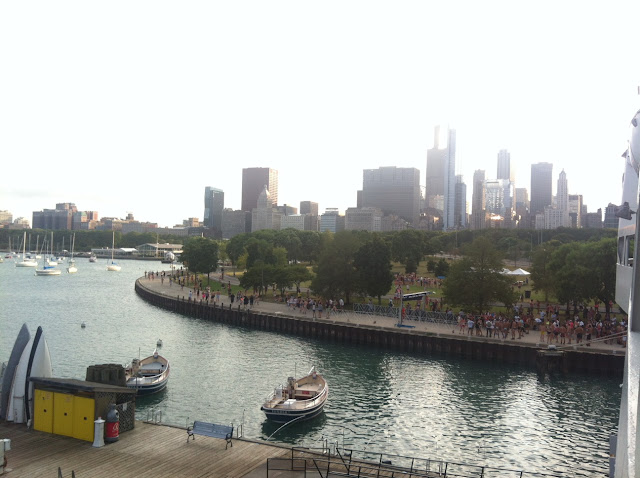 The post-race party was on the Columbia Yacht Club which was really sweet. They had food and drinks for sale but unfortunately neither of us brought money so we just had to settle for the free Mike's Hard Lemonade... I haven't had one of those in almost a decade and it really wasn't that bad, but I don't think I could handle more than one of those - they're really super-sweet.

We hung out for a while after the race, people-watching and drinking the free ONE coconut water and then walked home. This is definitely a race I would do again.

Today I went and picked up my packet for the BTN Big 10K tomorrow. I'm from Texas and don't represent any of the Big 10 schools so I originally went with the plain BTN Fan shirt, but I switched over to Northwestern to represent for my media team running pal (and Northwestern alum) Dina Bair. Purple is definitely not a color I have represented in my current running shirt selection so that worked out well.