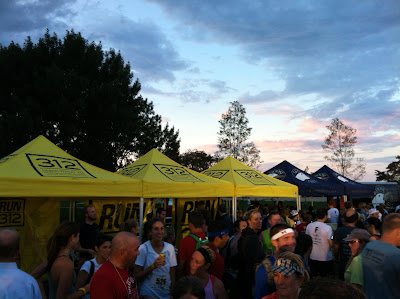 Monday night I ran Universal Sole's inaugural Burgers & Beer 5K. It's a race that grew out of a monthly run of the same name that Universal Sole has been doing for the past three years and it definitely had a grass roots feel to it with a pretty small basecamp (including a small Goose Island beer garden and a burger station - shown to the right) and race co-directors Joel Feinberg and Kimberley Stedman serving as co-announcers before, during and after the race. There were about 600 runners overall, which is a pretty good-sized field for an inaugural local run. I would guess that including the words "Burgers" and "Beer" in a race's title is a pretty good way to get people interested in it. 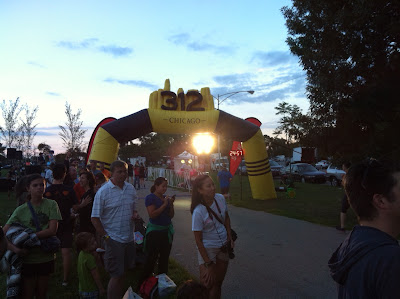 The race started and finished on the sidewalk in Montrose Harbor where several other races (Bunny Rock, Miles for Melanoma, Champions Run, among others) have taken place this year. And maybe it was the 7pm start or the temperatures in the low 70s but the course felt especially smooth and quick. Maybe it just helped knowing that there were burgers waiting at the finish line... Even though I was keeping track of my time via my watch throughout the race I was surprised when I finished with a 20:56, breaking 21 for only the second time. Maybe it's the marathon training kicking in - or maybe evening runs are a little easier for me to get into. I don't know... but this is definitely a race I would recommend checking out next year. 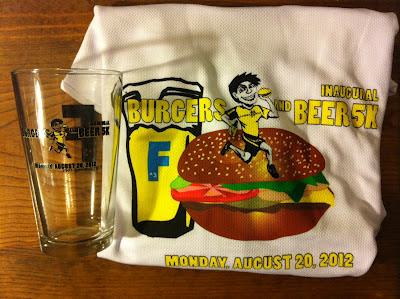 The after-party was very chill and felt kind of like a neighborhood party more than a race party (aside from some long lines for the burgers) and the raffle after the awards ceremony gave out some great prizes. I wasn't too crazy about the shirt, but I really like the pint glass.


Anyway, my full write-up on the Burgers and Beer 5K race is up at Newcity.com.

So, starting this afternoon, this weekend is going to be pretty packed with all kinds of sports/fitness/fun things. Friday and Saturday is the expo for the Chicago Triathlon (aka the Chicago Multisport and Fitness Expo). Brynn and I are planning to head over there this afternoon (even though we're not participating in the triathlon). It's supposed to be a huge expo and I'm sure there will be plenty of running stuff there. I'm going to be waking up early on Sunday to check out the start of the triathlon as well.

And Saturday is Chicago City Chase. I picked up our packets (actually canvas bags with Chipotle logos on them) on Wednesday night - they're a little more sturdy and better looking than the typical race gear check bags. I'm getting kind of excited about this City Chase thing. I'm not sure what to expect but it seems like it's going to be fun. The first ChasePoint has already been announced - teams need to raise at least $40 for Special Olympics Chicago, so we set up our fundraising page. It's an interesting way to get teams involved in fundraising.

And Sunday morning, after watching the start of the triathlon, I'm going to head over to Lincoln Park for the WTTW Kids Fun and Run 5K. I don't have any kids but I'd still like to meet Clifford and Curious George. Seriously, who doesn't want to meet Curious George?