Chicago 10K and Game On, World with Nike

August 12, 2012
First off, I found out from fellow running blogger Erica Reid that we were both quoted in RAM Racing's blog post about the Terrapin 5K, which is pretty sweet. It was definitely a good race.

But on to this morning. As I said in my Newcity review, naming your race "Chicago 10K" is a bold move. This is a big city and there are already a lot of 10Ks out there (popular ones at that). But this morning's race definitely marked an auspicious start for the Chicago 10K. Even though it's only the race's inaugural year they managed to sell out (even with a $50-60 entry fee that wasn't exactly cheap). It could be argued that they kept the entries low so that they would sell out and be able to use that as a marketing ploy, but even if they did I'd say that they made the right decision. They kept entries to a realistic level for what they could handle with the base camp that they had to work with and the open course on the Lakefront Trail. And with the runners that they had (I'd guess around 2000) everything worked out about as perfectly as a race could.

There were a ton of volunteers along the course - probably the most I've seen on any 5 or 10K course so far this year.

There wasn't anything too special about the course, aside from where it started and finished. I haven't seen Arvey Field used as a base camp for a race before but it really functions nicely for that purpose. I liked the starting line and that even though it was pretty much an out and back course, you approached the finish line from the same direction that you took off from (even though that also meant that you had to run up a hill to get to it). And after yesterday's Champions Run 10K I was glad to see that they had the turnaround very clearly marked. In fact they had FIVE volunteers waving orange flags, a series of cones blocking the path, and a big sign that said "TURNAROUND." Now that's how you keep people from going the wrong way! 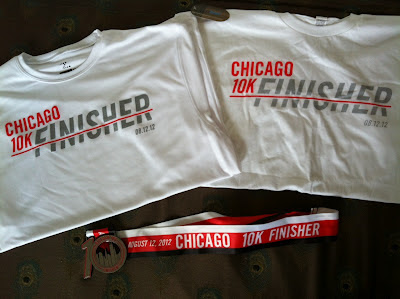 I felt pretty good throughout and ended up with a 46 something - not sure exactly til I see the official results since I don't think I started or stopped my watch at the right time. But overall this was a really well-run race that had just the right amount of runners. And though I'm not a huge fan of participant medals for a 5K or 10K, the ones that they gave out here were really nice. A nice 10 shape with some red glass looking stuff behind a cityscape. It's a hefty medal too. Also, the two shirt styles (there's both a cotton and a racing shirt depending on which one you opted for) were both nice. Very simple but classy. I'm a fan of white running shirts, maybe because it's been so hot all summer, and I really like these. Also to pull of a nice looking white cotton race shirt is tough, so well played Chicago 10K.

And finally, they had a good live band (Ear Candy) playing both before and after the race. They were mainly playing covers of cheesy pop songs (Ke$ha's "Tik Tok", Kelly Clarkson's "Since U Been Gone" and even Lou Bega's classic "Mambo Number Five" which I thought was dead long ago. I have to admit that I love music like this. And they had a female singer that was going all out in the way that you absolutely must if you're going to sing songs like this. 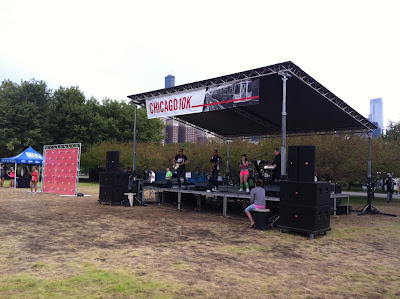 I also might have just liked her because she was dressed in a style that was kind of similar to my favorite female artist, Yo-Landi Vi$$er from Die Antwoord: 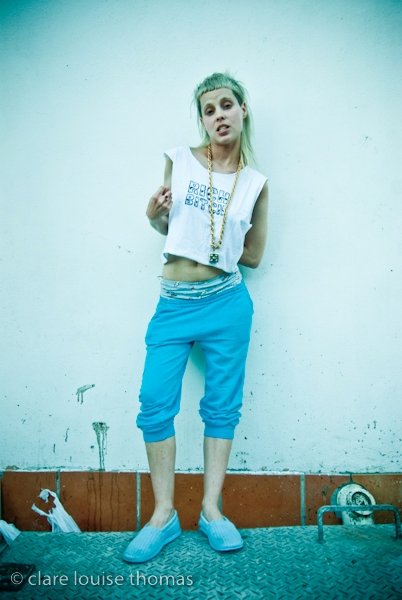 After the race I went to run with Brynn (we were supposed to run 12 miles today according to our marathon training schedule). Foolishly I was planning to run an additional 12 after the 10K and do the entire run with her even though she kept telling me this was a bad idea... so about 2 miles in (after she repeatedly offered to turn around at the 3 mile point and then just do the same course twice) I finally saw the error of my ways and took her up on that offer. I'm very glad I did because there's no way I would have finished an additional 12.

But today is the day that anyone with a Nike Fuelband is supposed to be striving for the MOST FUEL they've ever gotten so I really just wanted to run more to reach that...