Elvis is Alive (and I hate bananas) 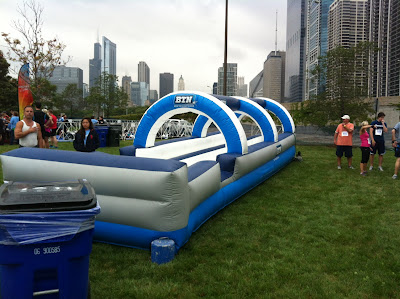 The first thing I noticed upon arriving at the party grounds for the Elvis is Alive 5K yesterday evening before the race was the giant inflatable slip 'n slide in the far west corner of the blocked off event area. Could it be? Yes, it was the same slip 'n slide from the BTN Big 10K course that I didn't slide on because I had my phone in my pocket during the run. It seems that the running gods (aka Fleet Feet) were giving me a second chance to check this thing out. But it wasn't turned on before the race so I had to wait until after finishing, which was probably for the best. And believe me, I definitely went sliding on this thing after the race (after picking up my free 312, of course).

I did have to wait for some kids to finish playing on it (come on kids, you guys can slide on a normal slip 'n slide any time - when you're 6' 2" you don't get to spend a lot of time doing these things). Anyway... it was just as awesome as it looks. I actually did it twice and got my shoes and socks totally soaked in the process, which kind of sucked for the mile or so walking home, but was totally worth it. Also I only saw a few other people do it. It wasn't a particularly warm night. So I'm not a trend-setter. (But I knew this already) 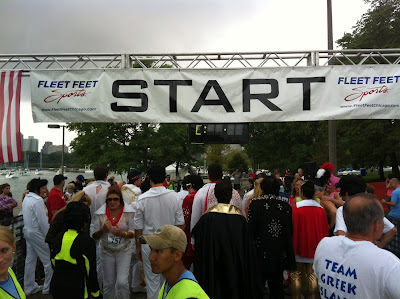 But enough about the slip 'n slide.

Before the race, working to get everyone psyched up for running with a bunch of Elvi, Joe "Elvis" Tirrito was playing with a band. And he takes his Elvis impersonating seriously so it was a pretty good show. And if the concentration of Elvisness wasn't enough, there's an "all-Elvis" starting corral so that the maximum amount of Elvisosity can be compacted into one small space. There were Elvises of various heights, weights, races and genders. And I was surprised at how many of them were wearing full-on Elvis costumes, pants and all. There were plenty more Elvises that were just wearing sideburns or glasses or something, but they didn't make the elite cut of the "all-Elvis" starting corral. 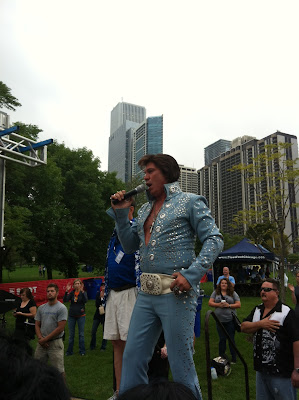 And for the icing on the cake, Joe Elvis came down from the stage and got up on the starting platform to sing the National Anthem. It was actually one of my favorite renditions I've heard at a race, even if he did say "...came through through the night..." (I forgive you Elvis). After the anthem, the race kicked off with Joe Elvis counting down like this:

One for the money
Two for the show
Three to get ready
Now... GO CAT GO!

Kind of cheesy, but also kind of an awesome way to start a race. And the race itself was great (especially for a $30 evening fun run). But I covered all of that in my Newcity review.

I finished in 23:12. My excuse is that I also ran 3 miles in the morning with Brynn for our marathon training. I initially was planning to take this run easy but about half a mile in this heavy-breathing dude started running alongside me and I had to escape. I think he ended up passing me later and finishing ahead of me anyway. But that's how it goes... 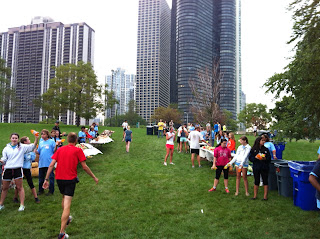 The finish line setup was done really well, directing runners through the finish line and then up a hill and back around to the post-race party area. I think I came off as one of those annoying unappreciative runners when volunteers offered me a sandwich. I thought it was peanut butter but right before they handed it to me they said, "Peanut butter and banana sandwich!" (of course it was - it's an Elvis race!) and I backed away like it had a spider in it or something... and then I felt bad and awkwardly apologized. It must have been a hassle cutting up all those bananas to make those sandwiches. And I'm sure everyone else was very excited to get one... but I really hate bananas.

So I refused to eat bananas and rode on a slip 'n slide. Did I mention how much of an adult I am?

I hung out for a little bit after the race checking out the music and the crowd before heading home. I'd say that overall this is a pretty great fun run and I can see how it's lasted for 15 years.

Even with the banana sandwiches. 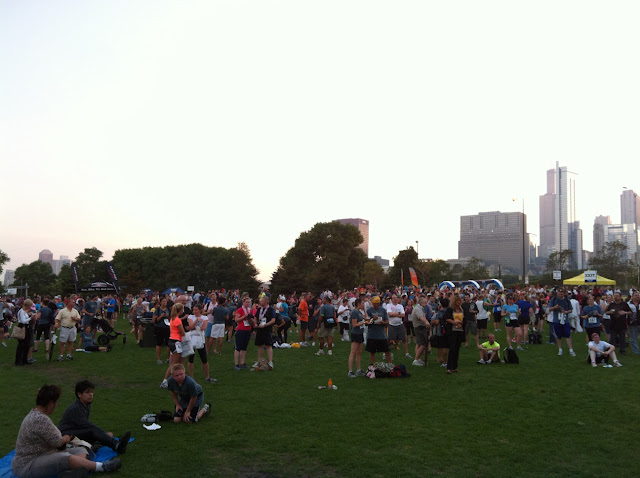