Running During the Chicago Air and Water Show

August 19, 2012
Yesterday I avoided a six mile training run by going to a bar to compete in the national trivia finals. My team (I use that phrase loosely as I was only an alternate) ended up in 5th place - and I helped drop us many points right off the bat when I thought the first question might be in my wheelhouse: What sport has been in every Olympic games since 1896 (except for the 1900 Olympic games)? I swore it had to be marathon... but it was wrestling. Running-obsession fail.

I was too excited about the fact that Brynn and I are running the Athens marathon in November to think about any other sports really. But one of the teams in our bar placed nationally which was pretty exciting.

So I traded six miles for drinking and discussing how many points a Backgammon board has (24) and who was the first sitting president to visit the New York Stock Exchange (Reagan). My marathon training certainly doesn't thank me... but my legs do. 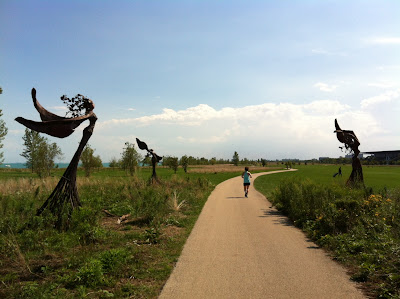 So today Brynn and I ran our nine mile training run in the midst of the final day of the Chicago Air and Water Show.

We decided to run south instead of north to avoid the biggest crowds and that strategy was mostly successful. We ran on the streets until we hit the Chicago Riverwalk at State and Wacker and then we followed that to the Lakefront Trail, around the Shedd Aquarium and the Adler Planetarium to spend a good deal of time on Northerly Island.

As I've mentioned before, Northerly Island is one of my favorite places to run in the city (especially on a day when the rest of the trail is crowded with spectators for something like the Air and Water Show.

And it really was a perfect day for running on Northerly Island. Even though we ran past a ton of spectators as far south as the aquarium, there was absolutely no one else on the trail (except some geese), which is nice on any running trail, but especially when you're in the middle of downtown Chicago on an otherwise busy day.
The weather was beautiful today and this run reminded me that we definitely haven't spent enough time running out here this summer. Hopefully there are enough good weather days left this year that we can run this far again before summer officially ends. 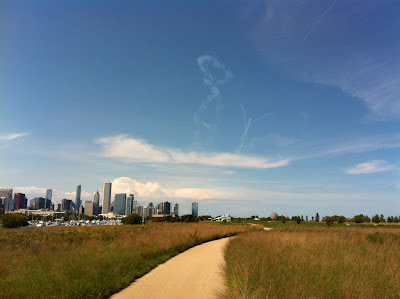 Tomorrow evening I'm running the Burgers and Beer 5K in Montrose Harbor. It should be a pretty good race (as long as it doesn't get too chilly in the evening), considering that you get a free burger and beer at the post-race party. Sometimes races can sound a little gimmicky, but the fact that this one grew out of a fun run that Universal Sole was putting on anyway gives me some faith that it's going to be a good race.

And next weekend Brynn and I are going to be hitting up the Chicago City Chase - it's not exactly a run but I'm sure there are some running aspects involved. It's described as an "urban adventure that requires participants to exhibit teamwork, resourcefulness, determination and the ability to make decisions on the fly as they search for ChasePoints scattered in unknown locations throughout the city." As an old married couple, our major goal is to see how many arguments we can get into while trying to complete the course...