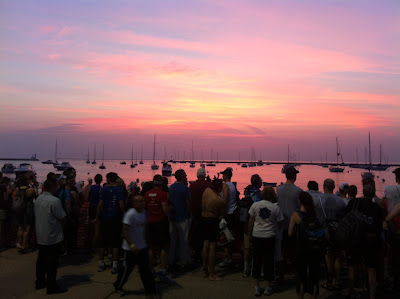 After the intensity of Chicago City Chase on Saturday, for some crazy reason I still wanted to see the starting line of the Chicago Triathlon. This one was the 30th anniversary of the race and the weather was perfect so I felt like being tired was no excuse. I've also never been to the starting line of a triathlon. So Sunday morning I woke up at 5 and took the red line to the Harrison stop and then walked to the lake (the intersection of Balbo and Lake Shore Drive to be exact). And even though I was tired, I have to say... it was totally worth it. 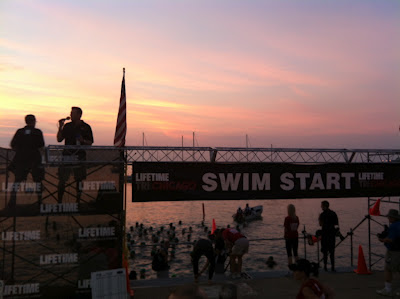 I got there around 5:45 just as the sun was coming up and walked around the starting area checking things out and waiting for the first wave to kick off at 6. The sky looked incredible and the weather was perfect (I say that as a spectator, I'd assume it was a little warm for participants) but the sunrise was pretty spectacular.
Even though I wasn't participating in the triathlon I got pretty pumped up just watching everyone gathering in the starting chute (or laying on the grass trying to get a few extra minutes of rest before their wave started). Watching each wave hop into Lake Michigan made me want to be a part of the race, even though I've never considered competing in a triathlon before. 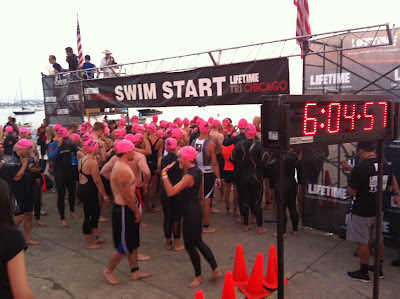 I stayed for the starts of the first five waves or so watching each group move forward in the chute into the swim start area and then into the water about a minute before their start time. They were putting four minutes between each wave of starters, which seems like a while but it felt like things were constantly flowing.

It was interesting to find out that different waves were designated by the different colored starting caps that they wore (white, pink, purple, green, etc.). I guess that's a pretty good way to tell if someone's in the right wave or not... I was surprised that there weren't more spectators. It seemed like most of the people at the starting line were dressed to compete in the triathlon at some point. Or maybe I'm just used to the giant crowds at the Chicago Marathon. 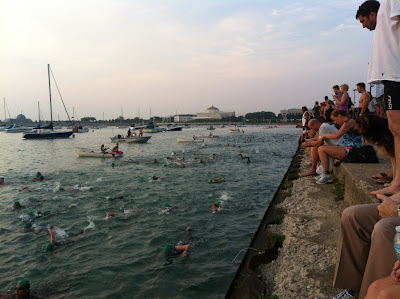 The cool thing about spectating the swimming part of the Chicago Triathlon is that you can pretty much follow your athlete for the entire swimming leg of the race. They're swimming right near the harbor walkway so it's easy to follow along. But since I wasn't following anyone particular I sat down for a while and watched several waves of swimmers go by. And even though this point wasn't that far into the race, there were already members of different waves intermingling. It was kind of amazing to notice the different levels of swimming capability as people went by. Some of these swimmers were just cutting through the water like it was nothing, while others were clearly struggling. I did see a few grabbing on to the lifeguard boats (there were a TON of these, so it seems like it's a pretty safe course) and two swimmers were being pulled out of the water by lifeguards on the shore. 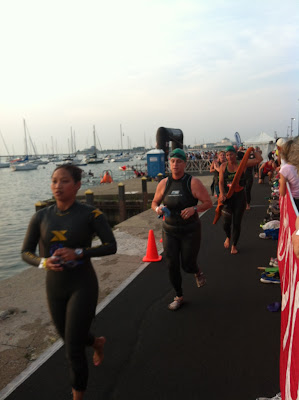 The next point on the course was the swimming-to-biking transition, where the athletes came out of the water and then followed a long black padded mat from the water exit to the transition area where all the bikes were stored. This running portion went on a lot longer than I expected it to. A lot of people were just running this barefoot in their wetsuits  (I'm guessing they waited til they got to their bikes to change) but some people started stripping their wetsuits off immediately and had running shoes waiting for them on the side of the course.

Since the water was so warm (relatively speaking) there were some people that weren't even wearing wetsuits to begin with, so I'm assuming this transition was a little quicker for them because of that.

After watching several people run into the bike transition area I used my media pass to get a closer look. This area was pretty overwhelming and really impressed on me the size of the race. I know that 8500 people were registered overall but I'm not sure how many bikes there were stored in this area. Just check out these pictures to get an idea of the massive amount of bikes that were being stored in the transition area: 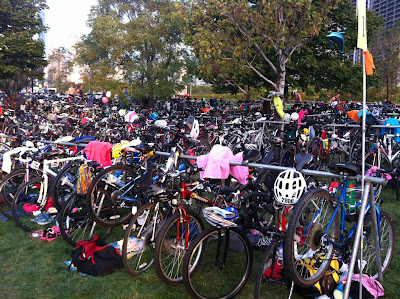 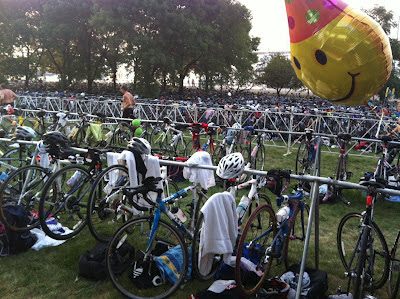 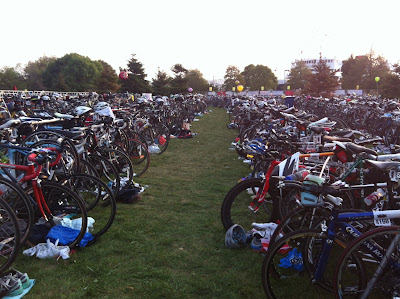 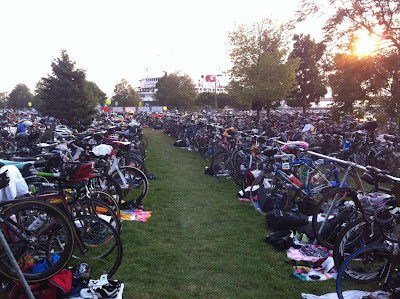 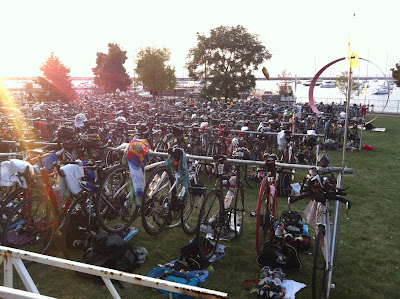 It was basically like a giant mall parking lot of bikes. Luckily, while I was there not very many participants came through since it was still pretty early. 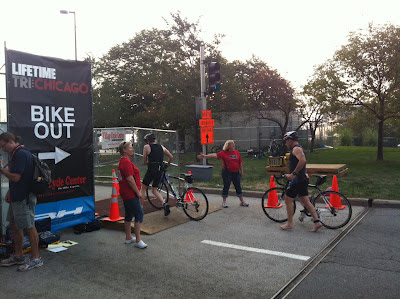 I made my way to the exit of the bike transition area and watched people hopping on their bikes and heading out, up the southbound ramp and onto Lake Shore Drive.

I can imagine that this specific checkpoint can get pretty hectic as the day goes on and more and more athletes are reaching this transition at the same time, but when I came through it was pretty quiet, with a few bikers heading out every now and then and no real line or clusters.

As I was coming out of the bike area, though, from watching people starting the biking portion of the race, the first finishers were coming back through and making the transition to re-enter the bike storage location and start the running. 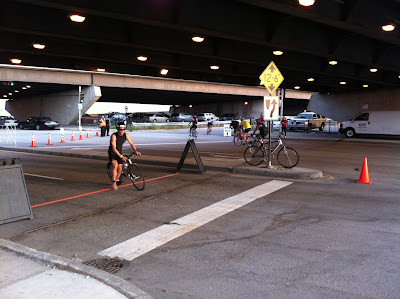 Watching these guys was kind of crazy - they would fly down the ramp with their feet already out of their bike shoes and then jump off their bikes and start running right when they hit the transition line.

I'm not a biker (the only bike I've had in the last five years was a Dutch Gazelle Basic that I won in a writing contest - I had it for almost a year and I literally only rode it once... home from the Dutch bike shop in Wicker Park) so all of this quick dismounting really impressed me, especially since they were snapping their feet out of these biking shoes beforehand. 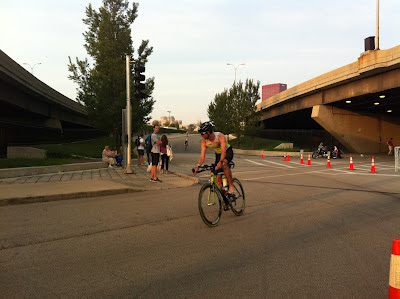 So, this was where my spectating came to an end. I didn't feel like walking back through the biking area to see the biking to running transition and I obviously couldn't follow the bikers in the same way I could follow the swimmers so I decided to take off (plus I had to run the WTTW 5K at 9 anyway).

Watching all of these multi-athletes though did make me glad that I'm registered for the Men's Health Urbanathlon in October. I do a ton of running but that's obviously not the only sport out there (gasp). I'm hoping that competing in something that's more all-around physically challenging (and that plays to my running strengths with an almost 11-mile long course) will challenge me to work out in different ways than just running (particularly upper-body stuff)... and at least there's no biking or swimming involved!