Your Guide to Chicago City Chase...

If you did City Chase this year then maybe this list will remind you of the challenges you chose to
take on (assuming there was some overlap). If not, maybe this will inspire you to take it on next year. If you're into the element of surprise (which is part of what makes City Chase so fun) then don't read any further (spoiler alert and all that). I won't be listing all the specifics about any of the challenges so there should still be some mystery around the challenges but this list should definitely give you a leg up if you're just looking to know more before you take this thing on yourself.

For a review of the event as a whole (not a detailed recounting of this year's challenges) check out my Newcity review.

Anyway, here we go. Since we picked up our packets and whatnot at one of the locations earlier in the week we didn't have to arrive at the starting line until just before 10 o'clock when the actual chase kicked off. But we got there around nine and checked out the starting area. Before the race they were giving out plenty of Red Bull and Neutrogena sunscreen and there was an Austrian biker doing all kinds of tricks on his bike. During the pre-race show the announcer said the biker's name about 100 times but I've actually forgotten it.. so now I know why he said the guy's name so many times.

The kickoff of the race involved running around the north part of Grant Park and finding five questions with multiple choice answers. When ordered in the proper way, the five correct letters spelled a word that you had to write down and present to the judges in order to get your clue list so you could start the actual chase. We ended up with the answer BRAUN which got us a list, but in hindsight that doesn't make sense because that's not a word. But if that's not it I'm not sure what the correct answer was. I went back and looked at the clues and there was no W anywhere so the answer wasn't BRAWN. I don't know... Surely Carole Moseley Braun doesn't warrant being the clue to start off a race like this does she? 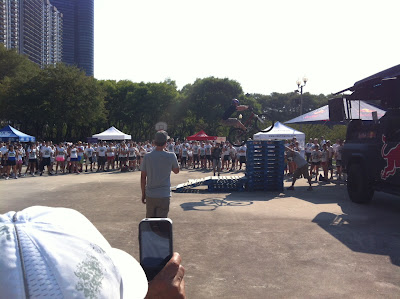 Anyway, below is the list of challenges we attempted (the ones we actually completed are highlighted in yellow). We spent the first two hours or so deciphering clues, running around without a game plan and basically not completing very much of anything, so we didn't really get into a planning/actionable groove until we were waiting for the Grand bus to take us from #4 to #5 below. From that point on we were moving pretty quickly and had gotten the hang of this whole City Chase thing.

So, here you go. The titles before each challenge are the titles that were given on the clue sheet (some are a bit cryptic but that's the way City Chase rolls):
We got to the finish line at 4:10 (the finish line officially closed at 4:30), so I think we were probably one of the last teams to complete ten challenges. Still I think we both felt good about what we accomplished and were just proud to have finished at all.

The after-party at Moe's Cantina was pretty massive. Every chaser got one ticket for a beer (Coors Light) and a mixed drink (with Southern Comfort). The top three teams, best costumes and highest fund-raisers were announced. 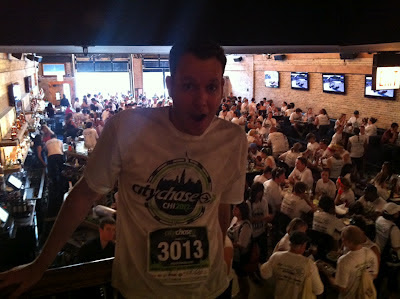 Overall, we had a great time over the course of the day (even if we did get in a number of logistical arguments). The biggest thing I would tell future chasers is to not underestimate how difficult this event is. Both Brynn and I exercise quite a bit (typically running about five days a week) and consider ourselves in pretty good shape, but this was a physically exhausting process for us. It may have been less exhausting if we'd spent more time upfront making plans and using the CTA rather than just running everywhere but there were a few challenges that weren't accessible aside from using your feet.

So, to sum everything up... wear sunscreen, wear comfortable shoes and make a plan before you even attempt to tackle your first challenge.